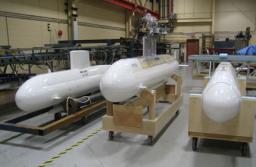 Research Centre: Ocean, Coastal and River Engineering
Industry: Marine
After four long-range patrol submarines crossed the ocean from Britain's Royal Navy to join the fleet of the Royal Canadian Navy, they were renamed HMCS Victoria, Windsor, Chicoutimi and Corner Brook. These Victoria Class submarines have since been equipped with new systems that are essential to their ongoing operation and will include a state-of-the-art autopilot control system designed and developed in Canada. Research Centre: Ocean, Coastal and River Engineering
Acknowledging the value of Shippagan Gully to the economy, the Department of Fisheries and Oceans (DFO) initiated a project to find the best way to improve the navigation conditions in the channel. But before any infrastructure building could begin, they needed to assess the impact that any new structures would have on wave and current activity. To do so, they turned to engineers at Public Works and Government Services Canada (PWGSC), researchers from the University of Ottawa and technical experts from the National Research Council (NRC) for help. Research Centre: Ocean, Coastal and River Engineering
One of Canadas most vulnerable waterways is the Red-Assiniboine Basin where storms and spring flooding send a great number of agricultural pollutants into Lake Winnipeg, the areas largest fresh-water resource. The resulting nutrient runoff acts like fertilizer, feeding microscopic algae which multiply rapidly and which create an algal bloom that depletes the oxygen in the water, increases water toxicity and puts fish, wildlife and people at risk of consuming these toxins.
Report a problem on this page