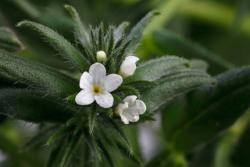 Research Centre: Aquatic and Crop Resource Development
Breaking a jar of liquid honey in his backpack while hiking in the 1990s got John Rowe thinking that honey should really be available in solid form. Since no one had ever invented such a product, he spent the next decade researching and developing the planet's first cube of solid honey that not only was 100 per cent natural, but also retained the look and taste of the raw source used to sweeten tea.