One of history's most celebrated works of art, Leonardo da Vinci's Mona Lisa, has been on display in the Louvre since 1804. While the original hand-painted colour portrait is 77 x 53 centimetres (30 x 20 inches), millions of copies of all sizes have been printed for art lovers everywhere.

This fall, the NanoFrazor, a powerful new nanopatterning tool, was installed at the National Research Council of Canada's (NRC) research space in Edmonton. The installation specialist was able to create a Mona Lisa replica so tiny that 1.4 million of them could fit inside an average grain of salt, and this took only 4  minutes. They produced a 3D image that is 16 x 12 micrometers—about .0016 x .0012 cm—with a gray scale of 100 nanometer depth. But this amazing demonstration is only one illustration of what the tool can do to revolutionize R&D prototyping.

With the arrival of Canada's first NanoFrazor from Switzerland this summer, researchers at the NRC's Nanotechnology Research Centre and collaborators at the University of Alberta in Edmonton are equipped with disruptive new technology that will accelerate their pioneering work in macro-to-atom connections.

According to Mark Salomons, NRC Team Lead, Developmental and Analytical Microscopy, this tool will save researchers time and money. "A regular electron beam lithography machine can do 50-nm linewidths, but takes about 10 times as long to create a sample," he says. "With the NanoFrazor, you can eliminate multiple steps in the process and do it just once." Its nano-scale process can chisel a 3-dimensional pattern into pliable polymer as small as 10 nanometers wide.

The Developmental and Analytical Microscopy team manipulates atoms to make tiny atomic circuits such as those in smartphones, for example. "We can build circuits that are 100 times smaller, but the issue is connecting to them and testing them," explains Salomons. "This tool enables us to link to atoms and run wires so we can operate them in the real world." It also allows the reverse—going from small to large. Moreover, atom-scale technology delivers an efficient performance through ultra-low energy use—an important consideration in the fight against climate change, which is a priority for the Government of Canada.

Salomons emphasizes that the NRC's work is not only developing technology that leverages the NanoFrazor, but also setting up the architecture to enable it. "We are laying the groundwork for atomic-scale manufacturing," he says. "So we're not just creating an application; we're making a completely new 'engine' that can be used in all kinds of vehicles." 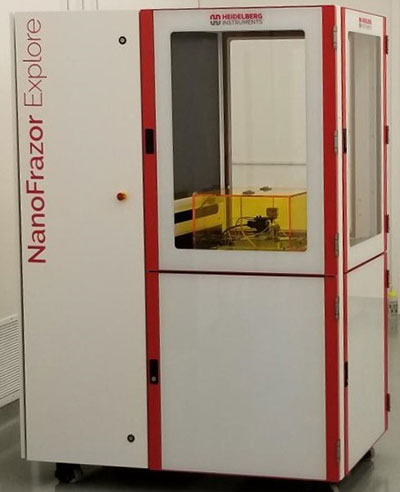 This cutting-edge tool is the latest example of the benefits brought to atom-scale technologies R&D by a longstanding partnership between the NRC's Nanotechnology Research Centre and the University of Alberta. The collaboration is advancing atom-to-macro connections, along with atom-scale manufacturing of sensors and other electronic devices. These not only offer increased performance, but also use orders of magnitude less energy than their existing non-atomic equivalents; and they can have immense commercial value.

Through a new joint Nanotechnology Initiative project led by the NRC's Dr. Jason Pitters and the University of Alberta's Dr. Robert Wolkow, the team is using the NanoFrazor in research that may usher in a new era of nano-scale manufacturing. This involves developing the connection between atom circuitry and wires and controls by building a main circuit board connecting computer components. The NanoFrazor can fabricate these connections much quicker than current technologies because it can do all of the processes in the same machine including imaging of the created pattern.

Other NRC projects will also apply the capability of the NanoFrazor to connect to atom-scale devices. These include quantum sensor projects with collaborators at the Université de Sherbrooke and McGill University. The NRC's Metrology Research Centre and the University of Alberta are also collaborating to use atom-defined, single-electron transistors as metrological standards for both temperature and electrical currents.

Even at the early stages of atom-scale research boosted by the power of the NanoFrazor, vast atomic-scale applications can be imagined—mobile phones, laptops, computer systems, that would use 100 times less energy than existing technology. But only time will tell how far this nanotechnology can truly go.