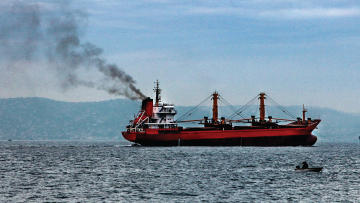 If you take a deep breath in a crowded shipping port, near a petroleum refinery or on a busy street, chances are you're inhaling some soot made of tiny nanoparticles emitted by hydrocarbon-based fossil-fuel combustion. These emissions can also contain traces of metal compounds (ash), which make the substance even more dangerous to the body. Few studies have delved into the ash content of engine emissions or measured the proportion of ash combined with the soot, because these properties are difficult to access.

But an important discovery is going to change how researchers approach ash measurements for engine emissions. In a routine exercise to gauge the amount of soot (black carbon) in aerosol samples collected from various internal combustion engines, scientists at the National Research Council of Canada (NRC) Metrology Research Centre found tiny dots of a much denser material in marine engine soot. After examining images from transmission electron microscopy (TEM) instruments, the Black Carbon Metrology team concluded that the dots were likely metal compounds, but wanted more precise confirmation.

"We asked our colleague Dr. Martin Couillard at the NRC's Energy, Mining and Environment Research Centre to examine these nanoparticles to see if they could find evidence of ash in the samples," says Dr. Stéphanie Gagné, Research Officer, Metrology Research Centre. "Fortunately, they had a powerful new technique – an annular dark‑field scanning transmission electron microscope (ADF‑STEM) that could visualize how the ash and soot particles mixed." This was definitely out‑of‑the‑box thinking, since conventional TEM imaging could not detect the tiny nanometre-sized ash particles nor determine their composition individually. ADF‑STEM had been used mainly in other industries such as semiconductors.

Dr. Gagné reports that the results were startling. "When we looked at emissions from residual fuels used only on ships, we realized the ash was not present as distinct spheres within the soot, like they are for distillate fuels such as diesel, natural gas and Jet A‑1," she says. "Rather, they had formed a coat of ash on top of the soot particles that other techniques had never detected." This coating appeared to be smeared on, so the team dubbed it "ash‑painted" soot. When the ash paints the surface of soot nanoparticles, the resulting composite particles behave just like soot, staying suspended in the air for days and posing a threat to the human body. Once inhaled, they may trigger toxic reactions in the body.

While NRC researchers regularly study engine emissions from many transportation sectors, expanding their studies in the marine sector was a major contributor to this discovery. Ships use residual fuel – the only type of fuel known to produce ash‑painted soot. "Black carbon particles from these engines tend to contain ash with quantities around 100 mg of vanadium alone per gram of carbon," says Dr. Joel Corbin, Research Officer, Metrology Research Centre. "This is considerably more than what comes out of engines from vehicles such as aircraft or cars."

"Over the course of this study, we used new or traditional tools in different ways, uncovering new clues with each technique," adds Dr. Corbin. "Once we put all the pieces together, we were able to confirm that ash and soot were mingling in a blend that could be hazardous to our health."

One important contribution was the mass spectrometry expertise of Dr. Zuzana Gajdosechova and her work with the team to develop new methods to analyze the particle surfaces. "Thanks to this, we became confident that the ash was on the surface of the particles and could therefore trigger a toxic response in the lungs," notes Dr. Gagné.

These findings are providing answers that will help Canada and the International Maritime Organization design effective policies to protect our air. Polluted air contributes to more than 15,000 premature deaths in Canada each year. It also intensifies asthma and other respiratory conditions, costing our economy $114 billion per year overall.

Dr. Gagné confirms that, for all the ideas to come together and change how people perceive ash and soot emissions, the NRC needed the right mix of people, scientific backgrounds and technical expertise to interact. The team's backgrounds included aerosols, heavy metal mass spectrometry, and microscopy imaging.

"We ended up with a unique group that found something truly unexpected."